What is Club foot?

Club foot (also known as talipes equinovarus) is a congenital (present at birth) foot deformity. It affects the bones, muscles, tendons and blood vessels and can be present in one or both feet. In club foot, the heel points downward, while the front half of the foot turns inward. The calf muscles on the affected side are smaller than on the normal side; the leg on the affected side is slightly shorter than on the other side. The foot itself is usually short and wide, and the heel cord (Achilles tendon) is tight. The condition is fairly common, occurring in about one of every 1,000 newborns. It affects boys twice as often as girls. Fifty percent of club foot cases affect both feet (bilateral). A club foot is visible at birth, and is often detected by fetal ultrasound before birth. 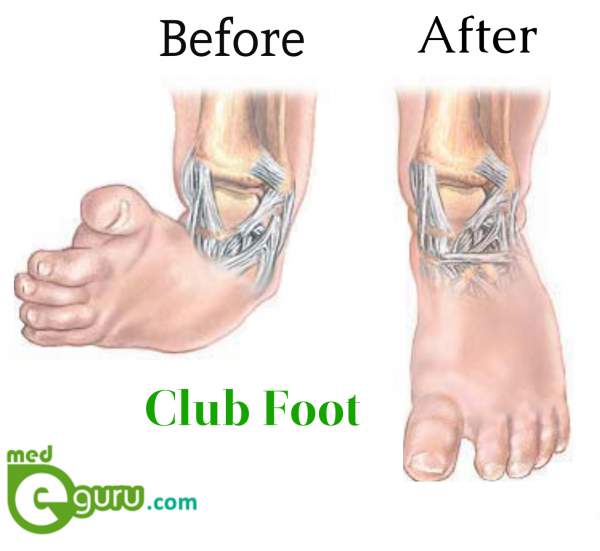 Twenty to 30 percent of kids need additional interventions later on in childhood for tendon tightness or to prevent recurrence of the condition. Most instances of club foot are idiopathic (no apparent cause). A club foot that occurs with some genetic syndromes and birth defects—such as Edwards syndrome (trisomy 18) or spina bifida (myelodysplasia)—can be more fixed, rigid and difficult to treat. Most children who are properly treated for club foot can run, play and live active lives, even though technically their foot and leg remain mildly abnormal.

The exact cause of club foot is not known. An abnormality of the tendons and ligaments in the foot causes an abnormal structure and position of the foot. In some children, bones may also be abnormal in terms of shape, size, or position. There may be a link to maternal smoking during pregnancy. If the foot is abnormally positioned in the uterus during pregnancy, it may not grow into a normal shape, but this is not usually considered a “true” club foot. Club foot may, in rare instances, be associated with spinal deformities such as spina bifida or other neuromuscular diseases; however, in these cases, the foot is usually more deformed.

What are the symptoms of Club Foot?

Club foot is easy to recognize. The key identifying features are:

This may begin from the first day of life up to several weeks after birth. The foot is pushed and twisted into an over corrected position by the orthopedist. The cast is then applied in order to hold the foot into that position. This may be uncomfortable for the child. Casts are usually changed every two weeks. Splints or braces may be used after a few years of casting the feet.

What are the Surgical procedures for club foot?

What are the Non - surgical procedures for club foot?

This is primarily a non-surgical treatment that can begin when the child is three months old. It involves frequent visits by a physical therapist who tapes and/or manipulates the foot. This method has proved highly successful in some cases.

Orthopedic Solutions from our Doctors and Hospitals