Normal air movement in and out of the lungs is restricted as asthma causes narrowing of the breathing airways. Only the bronchial tubes are involved and it does not affect the lung tissue air sacs.The 3 main reasons: inflammation, bronchospasm, and hyperactivity cause the narrowing that occurs in asthma.

The chief and most significantreason causing bronchial tubes narrowing is inflammation. The bronchial tubes become red, irritated, and swollen. This inflammation thus results in a smaller passageway for air to flow through, thus increasing the thickness of the bronchial tube wall.The inflammation occurs in reaction to an allergen or irritant and results from the chemical mediator action (histamine, leukotrienes, and others). The inflamed tissues produce an additional amount of “sticky” mucus into the tubes. The mucus clump together and form “plugs” that obstruct the smaller airways. These damaged cells are shed into the airways, thereby contributing to the narrowing.

The bronchial tubes muscles tighten during an asthma attack. This airwaymuscle constriction is called bronchospasm. This causes the airway to narrow further. Chemical mediators and nerves in the bronchial tubes cause the muscleconstriction. Bronchospasm can occur in all humans and can be brought on by inhaling cold or dry air. 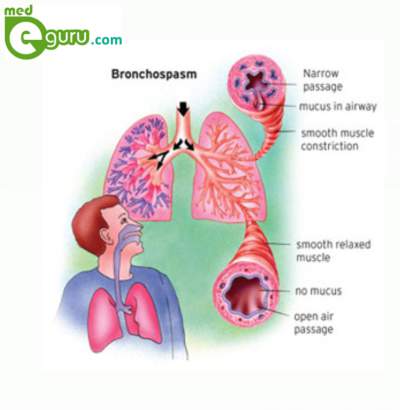 In asthmatic patients, the chronically inflamed and constricted airways become highly sensitive, or react, to triggers such as allergens, irritants, and infections. Exposure to these triggers may result in increasingly more inflammation and narrowing.When these three factors combines,it affects breathing outor exhaling, which as a result, the air needs to be powerfully exhaled to overcome the narrowing, thereby causing the distinctive “wheezing” sound.Asthmatic people also often “cough” in an effort to eject the profuse mucus plugs. The air flow dropmay effect in less oxygen passing into the bloodstream, and if very severe, carbon dioxide may hazardouslyamass in the blood.Asthma affects the lungs; thus, interrupting breathing activity. The breathing passages, bronchioles, become highly sensitive to many ‘triggers’. The most common reasonsfor asthma attack include smoke exposure, dust, pollens and overworking.Emotiveresponse like getting overly animated or tensed is another likelycause of triggering asthma attack, where breathing becomes hard. Lungs in this setup incline to function more rapidly than normal. Consequently, inhaler assistance is desired to lower lungs in order to catch up with the breathing process.

Asthma narrows breathing airways, disturbingthe normal movement needed for inhaling and exhaling. As air sacs or lung tissue is not involved in the process, the bronchial tubes are affected.The cause for narrowing of respiratory airway is inflammation, bronchospasm and hyper reactivity.The airways become swollen as a result of mucus deposition during inflammation.Development of mucus clumps further obstructs the airway.Owing to bronchospasm contraction, respiratory airways narrows further.As a result of inflammation tissues get damaged and get dropped into the airways causing narrowing.

Asthma causes resistance to exhalation, because of which this condition is also stated to as obstructive lung disease. This lung condition is known as Chronic Obstructive Pulmonary Disease (COPD) in medical terms, which also consist of maladies like chronic bronchitis and emphysema.