In November, Joshua Apte, a Scientist from America visited India to give an insight to the alarming findings he collected about the air pollution in Delhi.He travelled in an autorickshaw with his laptop and various air pollution monitors.Monitors spiked throughout the journey.It was cocnluded that in a city of 25 million, the people who spends time near to the road will be the most affected.The sad part is that half of the New Delhi residents live  300 metres from a major road.The chances of getting respiratory diseases such as Tuberculosis, Bronchitis, Pneumonia, Emphysema, Lung Cancer and Asthma. Delhi was declared the worst polluted city by WHO some time back and the conditons have even more worsened according to Joshua Apte findings. 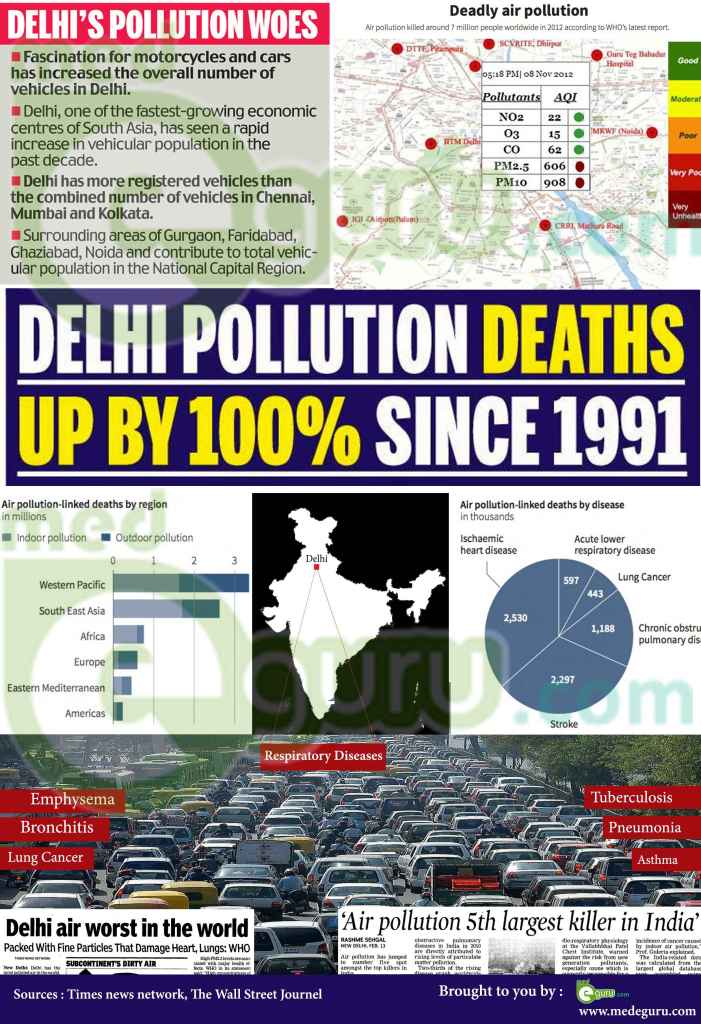 In Delhi the air quality monitors are kept away from roads on top of buildings, but that is not the place where the people spend their time. Recent studies show that people living in cities spent at least 1 - 3 hours a day in traffic.According to WHO outdoor pollution kills million of people around the world every year of which more than 620000 are from India.The pollution from vehicles is one of the main culprits.

India is a country of More Than 1.2 billion population and the car ownership rate is having a tremendous growth as the years pass by.About 20 million people owned cars in 1992 which after 2 decades became 140 million and by is expected to exceed 400 million.

The main Goal is to show the difference between pollution along roads and urban background readings.Joshua Apte gathered information with various approaches, he traveled 2 times daily in the peak hours from center of the city to the southeast suburb.He also traveled in regular cars with the windows closed and also recorded the readings at the rooftops where the air quality monitors are kept. The findings was that the black carbon levels was 3 times higher than the official readings .The level of black carbon concluded that diesel and badly tuned vehicle are the main culprits.Readings Joshua Apte got was 3 times higher than the readings from the air quality monitors installed by the officials. The average level of Ultra fine particles are so high(8 times higher) that it broke Joshua Apte’s measuring equipment.Ultra fine particles are considered to be very hazardous.

So the experts conclude that no one is individually responsible.It is high time that people join hands and work towards protecting the city from pollution.People have to realize the fact that air pollution is very higher than those shown in the air quality monitors installed in the city which itself shows high readings.The capital city also faces another source of air pollution ie the atmospheric dust blown from Rajasthan deserts and from open fires by the poor to keep them warm and for cooking.