What are the types of spine in human body?

What are Intervertebral disc?

The disc that are seen in between adjacentÂ vertebrae in the spine are calledÂ Intervertebral discs also known as intervertebral fibrocartilage. Discs are circular in shape with harder outer area.The discs allow the position of the spine to be maintained and allow it to perform actions like bending stretching and twisting. The inner area of disc consists of a jelly like substance.

When is disc replacement surgery performed?

As a person ages, the water content in the disc reduces and becomes more brittle and less flexible. In due course of time the disc degenerates and results in its collapse. This eventually makes the vertebra above this disc to shift towards the disc below. Reduction in disc height affects the facet joints also. As the disc is not sharing its normal load, the facet joint begins to take a part of the load transmitted to the vertebrae. This additional pressure on the facet joint increases the pressure on the ligaments of this joint which can be a reason for the formation arthritis to the facet joint. Shrinkage of disc height reduces the passage through the spinal nerves travel to different parts of the body. Bone spurs produced by arthritis also cause the narrowing of the passage area for the nerves.The solution for the above referred problems is either fusion of vertebrae of replacing of the damage discs by artificial discs known as prosthesis so that the normal distance between the vertebrae can be restored.The patients who are subjected to chronic pain due to disc degeneration are the patients most benefited from the disc replacement surgeries. By this process they can circumvent the earlier process of disk fusion which will cause some reduction in the mobility.

What are the types of Artificial discs designs used for disc replacement surgery?

Artificial disc used for lumbar regions comes in different designs and are usually made of metal, plastic or ceramic. Some consists of two end plates which are sandwiched with a plastic spacer. Usually cobalt chromium alloy is used for making the end plates.

The spacer is made of polyethylene which acts as the core in such a way that in between the end-plates it imitates the normal of action of a disc vertebrae combination. The prosthesis consists of titanium and polyurethane components in metal plastic combination. Some prosthesis is made of stainless steel alone which is an example of all metal prosthesis.Another design of artificial implant consists of a ball and socket arrangement which articulates to duplicate the normal activities of a vertebral joint.

What is the procedure for disc replacement surgery?

The surgical procedure is carried out through the anterior of the spine by two surgeons, a spine surgeon and a vascular surgeon. The prosthesis implanted in the body through an incision made in your belly or abdomen. The middle portion of the damaged disc is removed first. Then the bones of the spine are moved apart to make space for removing the remaining part of the disc. The remaining part of the disc and the fragments of disc pressing against the nerve will also be removed with the help of a surgical microscope. Now the upper vertebra is jacked up to provide space for prosthesis. Now using X-ray or fluoroscope the artificial disc is implanted into the space created for this purpose. The images in the fluoroscope help the surgeon to ascertain the exact location where the implanted prosthesis is located. Thus fluoroscope helps the surgeon to carry out the procedure accurately with proper positioning of the prosthesis. Now the surgeon moves the spine in various directions to confirm the correct positioning and functioning of the implanted prosthesis. 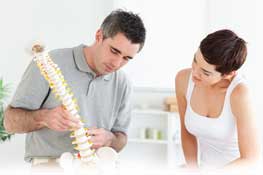