Menses are a natural cleansing process that takes place in a woman’s body. Menstrual disorders are problems that affect a woman’s normal menstrual cycle.

These problems include painful cramps during bleeding, abnormal heavy bleeding, or not having any bleeding. Menstruation occurs during the years between the puberty and menopause. Menstruation is also called as period, which is the monthly blood from the uterus through the cervix through the vagina.

In case of delayed cycles, crush Â˝ tsp of dill seeds and steep them in a glass of water. Strain out the seeds and drink.

The unripe papaya helps the contractions of the muscle fibres of the uterus and is thus helping in securing a proper menstrual flow.Papaya is found to be useful when mestruation ceases due to stress.

In case of excessive bleeding take six grams of corainder seeds and boil them in half litre of water. Add sugar to this decoction and drink it when it’s still warm.

Depending on the physical state of the patient climate conditions, these herbal medications can be applied during the cycle, asafetida, henna, ginger, aloe vera, valerian, castor oil, ashwagandha and liquorice. These herbal medicines may not be applicable for every person. 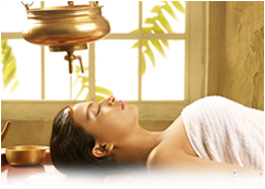 Look for a Ayurveda Treatment in your Area